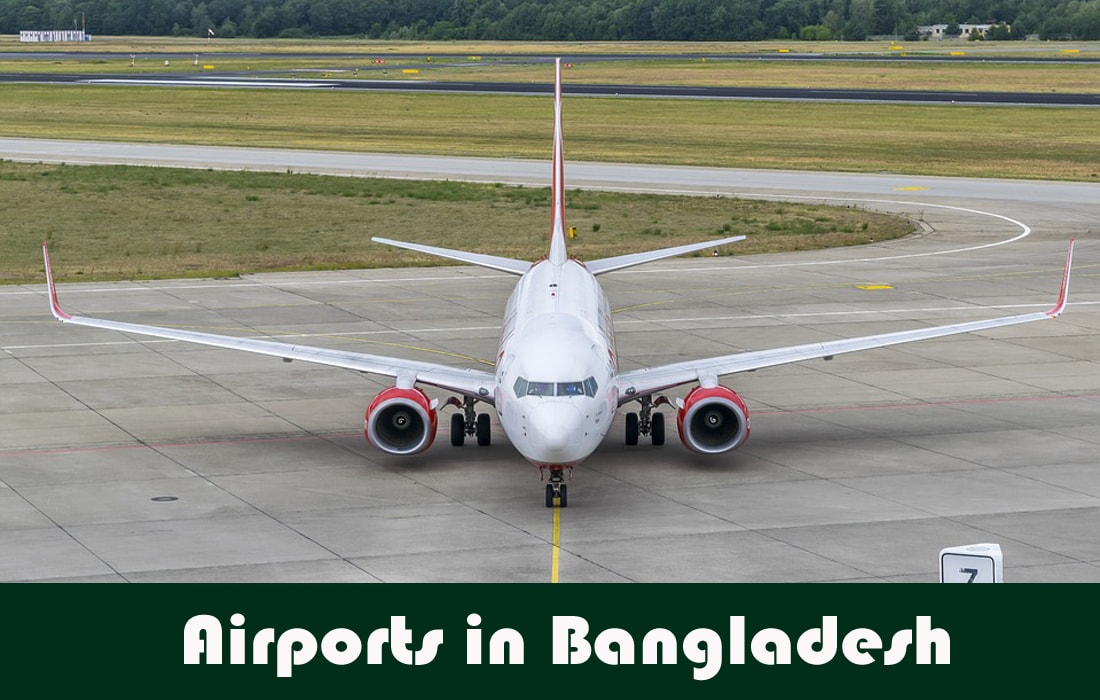 Airport, also called air terminal, aerodrome, or airfield, site and installation for the takeoff and landing of aircraft. An airport usually has paved runways and maintenance facilities and serves as a terminal for passengers and cargo (Ref). The sole perspective of an airport is moving aircraft into and out of the country.

Bangladesh Airports are playing a major role in countries economic growth. More than 10 million people of Bangladesh live outside of the country. They are the key player of the rapid growth of Bangladesh economy after the garments industry. Those Bangladeshi send their hard earn money as remittance and in Bangladesh, they are known as the Remittance Fighter. Majority of them lives in the Middle East, Malaysia, Europe, Australia and North America. All of them travel through all the International Airports of Bangladesh. 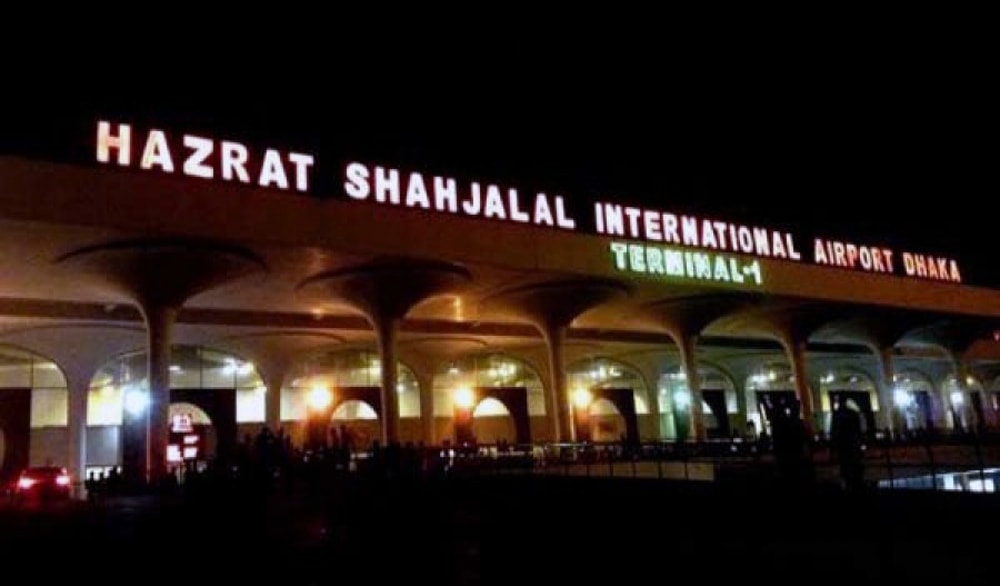 The length of the runway of Hazrat Shahjalal International Airport, Dhaka is 11,500 feet or  3,505 meters.

The annual passenger handling capacity of the airport is 18.5 million passengers. This is the primary hub of the national flag carrier Biman Bangladesh Airlines. In addition, it is also the main hub of most of the private airlines in Bangladesh including Regent Airways, Novoair and US-Bangla Airlines. More than 90% of aeronautical functions of CAAB (Civil Aviation Authority of Bangladesh) is carried out from Hazrat Shahjalal International Airport.

Ticket Sales Counter: For the advantage of the respectable passengers, the international ticket sales counter of Biman Bangladesh Airlines Ltd. is established in the concourse hall (first floor) of international terminal building Telephone: +880 2 8901500-19, Ext. -2911and direct call +880 2 8901757) and the domestic sales counter of different airlines including Biman are in the domestic terminal building (Telephone: +880 2 8901500-19, Ext.-5420).

Some of the active, popular International, Local and Budget Airlines operates from Hazrat Shahjalal International Airport and their destinations are –

Both local and international cargo flights operate from Hazrat Shahjalal International Airport, Dhaka. Some of the mentionable cargo operators are – 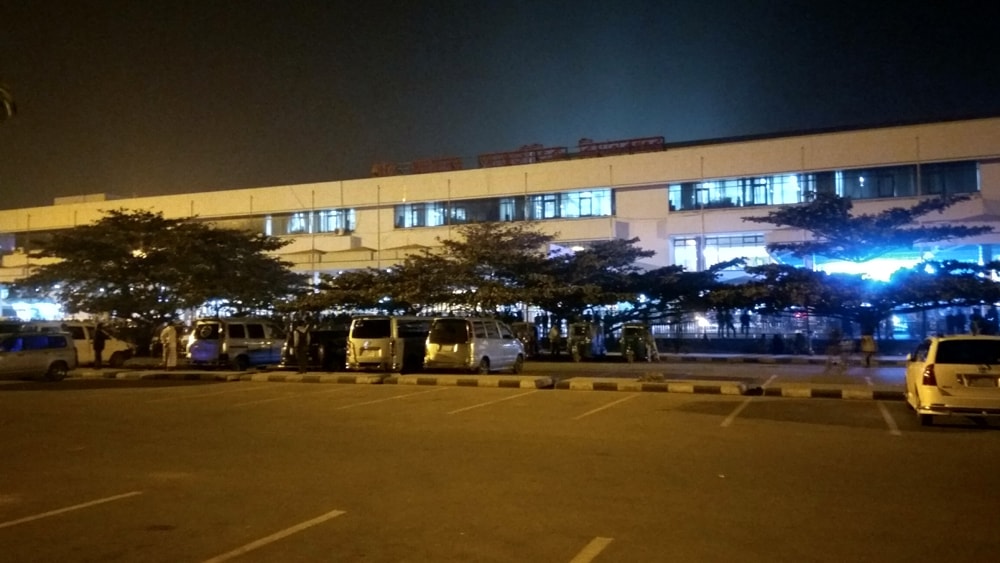 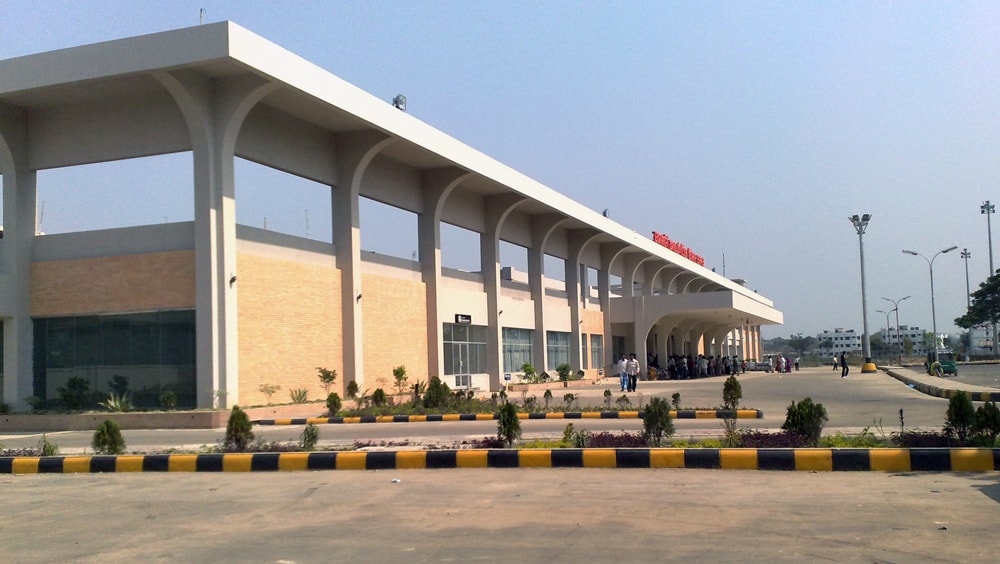 The airport is operated by the Civil Aviation Authority, Bangladesh (CAAB) and is served by Biman Bangladesh Airlines, which earned most of its revenue from this airport. The length of the runway of Osmani International Airport is 9,646 feet or  2,940 meters.

Biman Bangladesh Airlines operates some domestic services between Sylhet and Dhaka which arrive from international destinations such as Jeddah, Abu Dhabi, Manchester, Muscat and London–Heathrow thus providing a direct inbound only service to Sylhet from those cities. Outbound from Sylhet to those cities involve a domestic flight to Dhaka and continuing on using an international one.

US-Bangla Airlines and Novoair operate Sylhet to Dhaka flight from Osmani International Airport. SkyAir is the only cargo operator at this airport which transfers cargo from Sylhet to Dhaka, Cox’s Bazar.

Bangladesh has a total of 11 domestic airports. But due to many reasons, only 5 of the domestics airports are operational. These five operational Domestic Airports of Bangladesh are Cox’s Bazar Airport, Shah Makhdum Airport, Jessore Airport, Saidpur Airport and Barishal Airport.

Air travel has become popular in recent days. Anyone who wants to travel to any of these domestic airports needs less than 60 minutes flight to arrive from the capital city Dhaka. Businessman or Other People who don’t want to travel long in the Bus or Train usually takes flight to cut their travel time. For example, the road distance between Dhaka to Chittagong is 265 KM and take approximately 7 hours by Bus. But, the Dhaka to Chittagong Flight on any airlines will take only 55 min approximately. If you are interested, you can learn how to Buy Bus Ticket in Bangladesh. 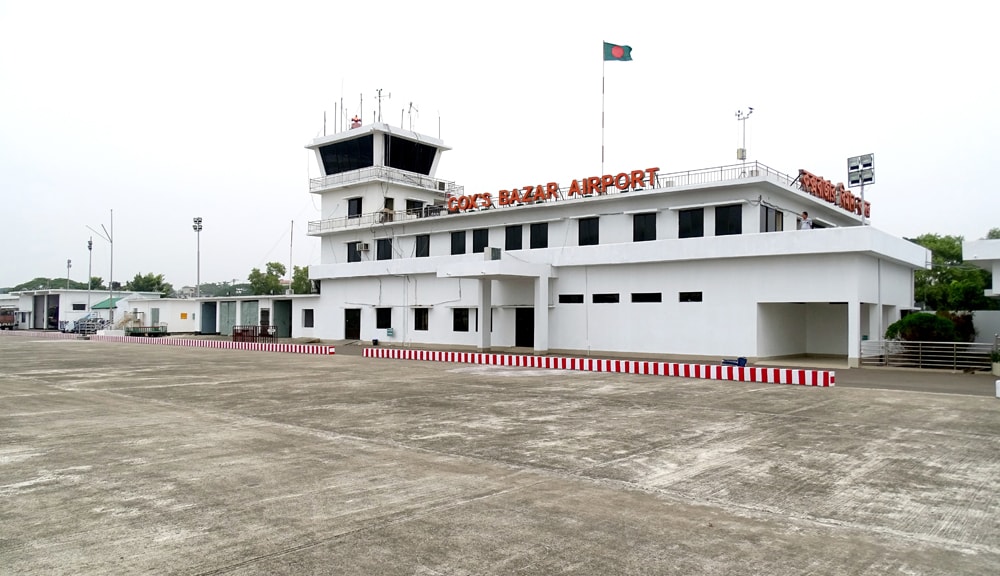 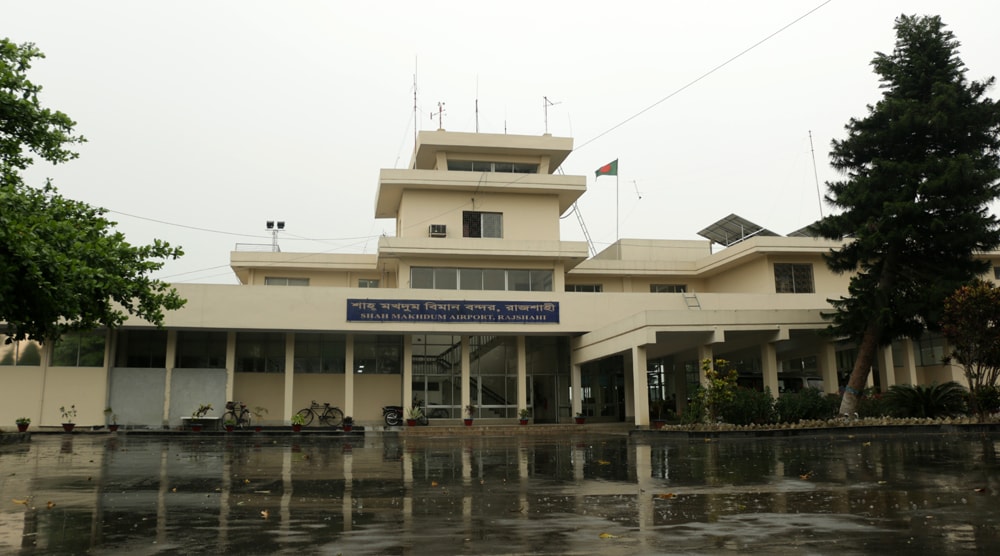 Shah Makhdum Airport is a Domestic Airport at Situated at the Western side of the country. It is about 10 km North of the Rajshahi city and beside Rajshahi-Nowgon highway. Three Passenger flights (Biman Bangladesh Airlines and US-Bangla Airlines, Novoair and Two Aviation academy) are operating in this Airport. Two Aviation Academy (Pilot training school) is running here. They have six/ seven training Aircraft those are operating from this Airport. 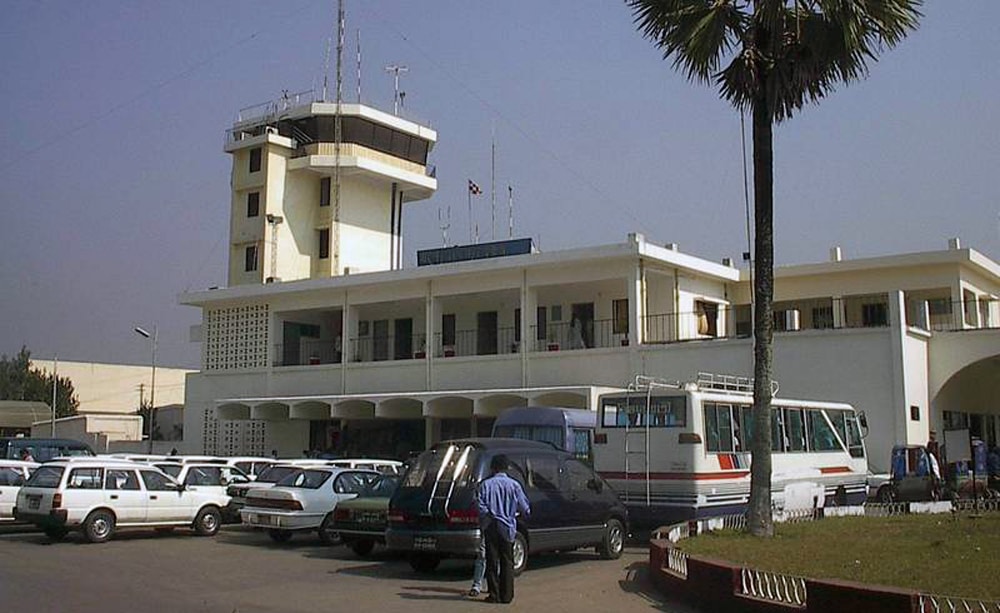 The only destination is Dhaka for the Passengers. Biman Bangladesh Airlines, Novoair and US-Bangla Airlines are presently operating their passenger flights in Jessore-Dhaka-Jessore route. Besides this domestic cargo flights are also operating to and from the different destination at Jessore Airport by Easy Fly Express airlines. 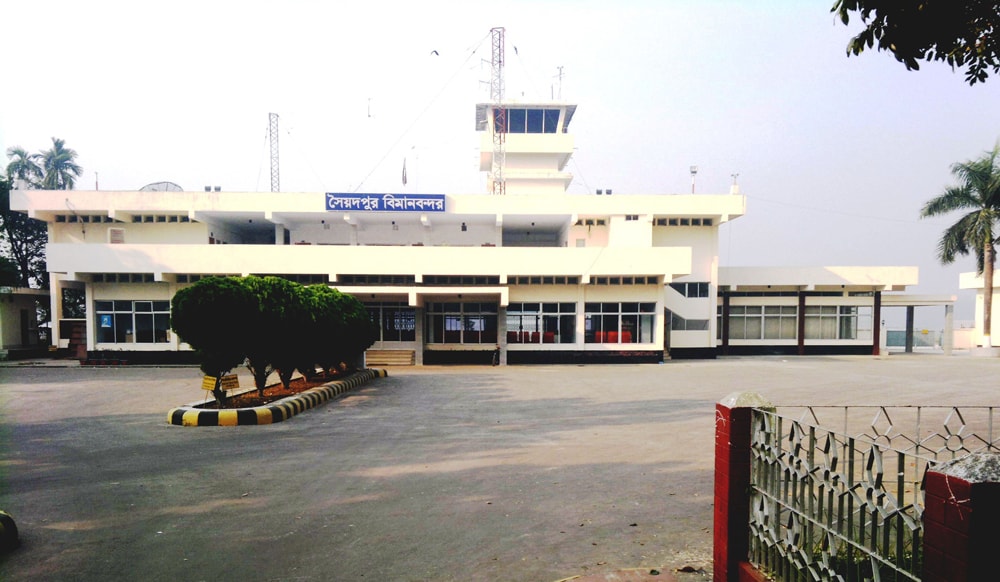 The only destination is Dhaka for the Passengers. Biman Bangladesh Airlines, Novoair and US-Bangla Airlines are presently operating their passenger flights from and to Saidpur Airport.

The only destination is Dhaka for the Passengers. Biman Bangladesh Airlines, Novoair and US-Bangla Airlines are presently operating their passenger flights from and to Barisal Airport.

There are 3 other domestics airports in Bangladesh, which can be used any time with pre-approval from the Civil Aviation Authority of Bangladesh if needed. These domestic airports are Tejgaon Airport, Bogra Airport and Shamshernagar Airport. Due to some reasons, these airports don’t operate regular flights. 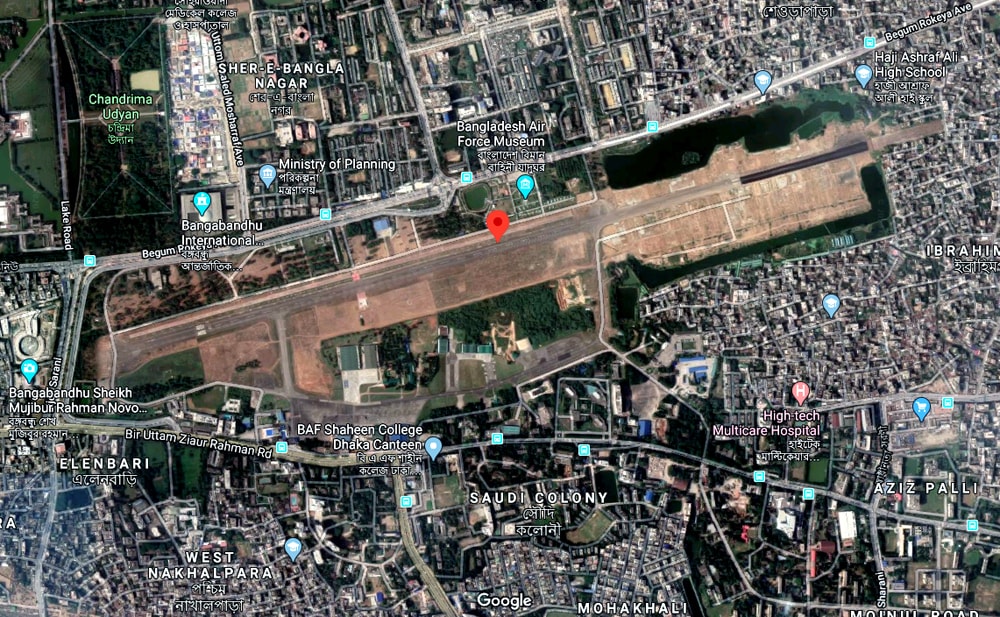 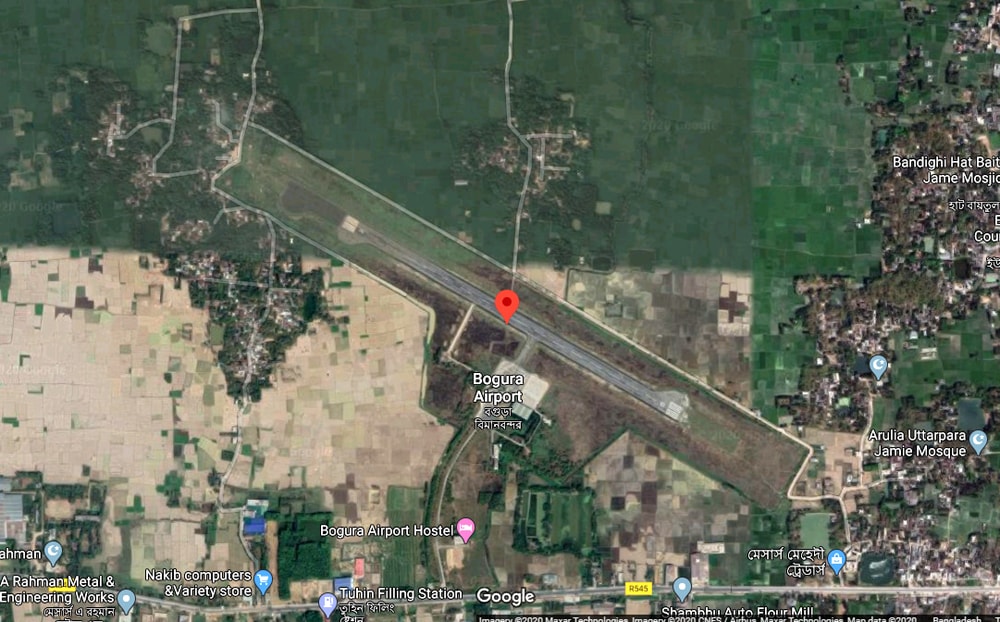 Bogra Airport is a public use airport 7 kilometres (4.3 mi) northwest of Bogra, Bangladesh. It is operated by the Bangladesh Air Force. As of July 2015, no scheduled passenger flights serve the airport, but civil air operations are allowed with prior approval.

The airport was dedicated on 12 March 2005. According to the Civil Aviation Authority of Bangladesh, airlines do not serve Bogra because demand is too low for a route to be commercially viable without smaller aircraft than those the airlines operate. The length of the runway of Bogra Airport is only 2,990 feet or  911 meters which makes Bogra Airport, the smallest domestic airport in Bangladesh. 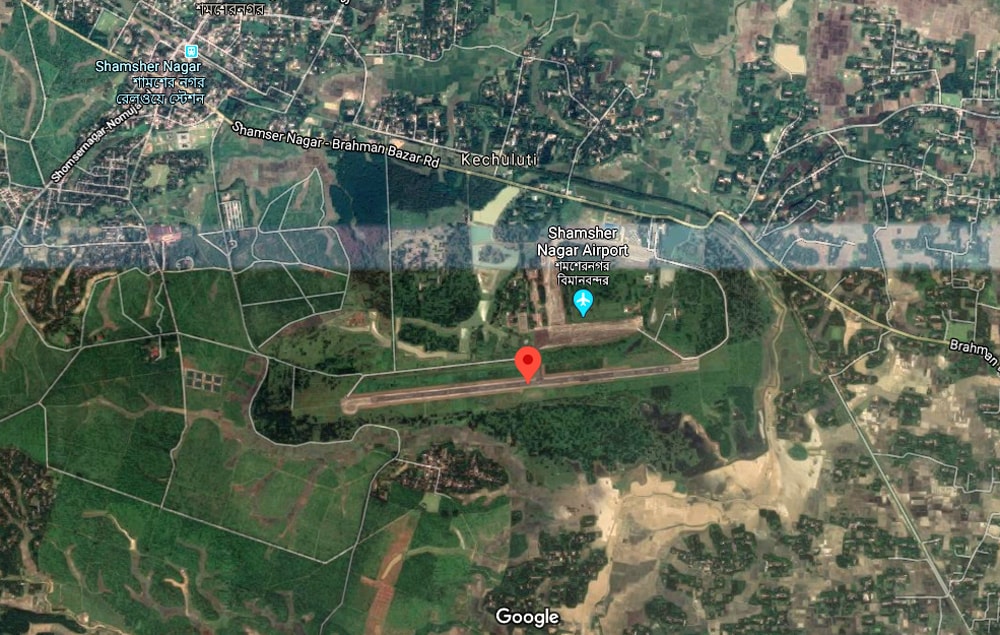 Shamshernagar Airport is a public use airport 17 kilometres (11 mi) southeast of Moulvibazar, Bangladesh. It is operated by the Civil Aviation Authority of Bangladesh (CAAB). Due to the short length of the runway, it is restricted to STOL aircraft. Civil air operations are allowed with prior approval. The length of the runway of Bogra Airport is 5,200 feet or 1,585 meters.

Bangladesh Airports: OUT Of Service

Some of the domestic airports of Bangladesh is out of service, but those can be resume at any time with some required renovation task. Some of them are out of service due to lack of passengers on that particular route.

Ishwardi Airport is a domestic airport in Ishwardi Upazila, Pabna, Bangladesh. Biman Bangladesh Airlines had regular flights to Dhaka until 1996.[1] On 18 November 2013, United Airways resumed flights to Dhaka, thus commercial services resumed after 17 years, but flights to the airport were suspended in mid-2014.
The length of the runway of Ishurdi Airport is approximately 4600 feet or 1,402 meters.
As of now, no airlines serve Ishwardi Airport. United Airways was the last airline to operate there, they stopped services in mid-2014.

Comilla Airport is a public-use airport located near Comilla, Bangladesh. The Airport is not currently in operation. No scheduled flights are available for this airport.
The length of the runway of Comilla Airport is 3,380 feet or 1,030 meters.

Thakurgaon Airport is a public and military used STOL airport located near Shibganj of Thakurgaon, Bangladesh. Airport was established in 1940 on 550 acres area. This airport was renovated in 1977, there were some commercial flights operated for a few years. Due to lack of interest and decreasing number of passengers, it went out of operation and abandoned since 1980. The Airport is not currently in operation. No scheduled flights are available for this airport.

There are a few numbers of Airfield which are used for Military operation. Some of them are active and some of them are closed. In Chittagong region, the airfields are Zahurul Haq Airbase, Dohazari Airfield, Chakaria Airport, Fenny Airfield and Hathazari Airfield. In Dhaka Khademul Bashar Airbase (also known as Tejgaon Airport), Matiur Rahman Airbase in Jessore and Bogra Airport in Bogra known as a military airbase.